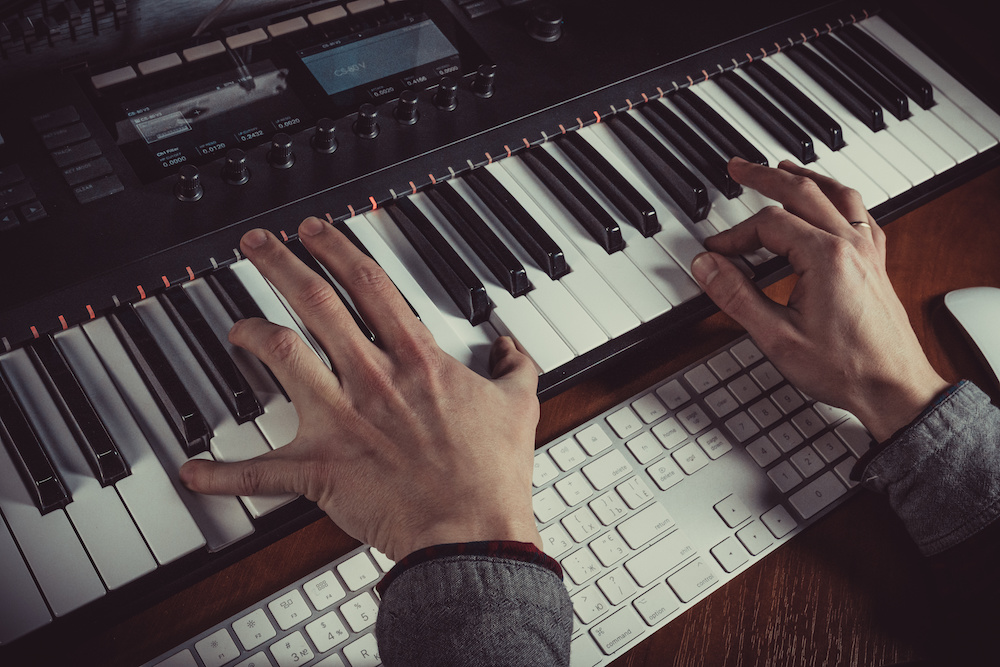 When Was MIDI Invented?

It is difficult for any musician or audio engineer to even imagine a world without MIDI.

The MIDI protocol has become the dominant method to connect different pieces of electronic musical equipment.

It was definitely a relief, especially after the era of expensive, large, and modular analog synthesizers.

This leads us to wonder when was MIDI invented.

MIDI has a rich past, present, and future, and knowing about them gives you a better understanding of this innovative creation.

Quick Navigation
What Is MIDI?
MIDI Cables
MIDI Interface
When Was MIDI Invented?
How MIDI Became a Standard
MIDI Today
Beyond MIDI
MIDI: Bringing Everyone Together

It is the electronic standard used to transmit music that is digitally encoded, but what does all of this mean?

MIDI is not exactly an instrument, nor is it a sound.

It can simply be referred to as the carrier of messages specifying the instructions of music.

For instance, if a progression of a chord is laid down through MIDI, the same chord’s vibrato, velocity, notes, tempo, pitch, and panning will be transmitted into an instrument with MIDI capabilities.

Every time a musician or audio engineer plays a MIDI instrument, the exact notes they play get transmitted into MIDI data.

This data will then get transferred to the computer and played in the same manner through another MIDI instrument.

MIDI cables are the ones responsible for connecting the MIDI devices, which range from computers, modules, instruments, and more.

These cables can come in singles or doubles, that is, for the in/out pair.

There are also right-angle MIDI cables and MIDI-to-USB cables.

The MIDI interface has practically changed the way how we all produce music.

With it, you no longer need to be renting out a music studio to lay down vocals or guitar tracks.

Thanks to the development and advancements of MIDI interfaces, the concept of a “bedroom producer” emerged.

It has leveled the playing field for audio engineers and musicians worldwide, and when a bedroom producer wins multiple Grammys, it becomes hard to justify the need for a studio.

When Was MIDI Invented?

In 1981, Sequential Circuits’ Dave Smith presented a paper on the “Universal Synthesizer Interface.”

Cut to two years later, at the winter NAMM show held in 1983, and the Sequential Circuits Prophet-600 could talk over a five-pin cable to a Roland Keyboard.

However, in the 1980s, polyphonic synthesizers could cost a huge sum, which meant that only the wealthy could afford them.

This led to Dave Smith coming with another innovative idea, which was to make an interface that’s so inexpensive, simple, and easy to use that no manufacturer would refuse it.

Dave helped to develop MIDI, but at that time, it was widely considered to be very slow by industry leaders and peers.

The MIDI Manufacturers Organization or the MMA wouldn’t back down, though.

In an industry filled with intense rivals, MMA managed to hold a coalition of the most competitive manufacturers during that time.

Eventually, their message became crystal-clear to everyone: If MIDI becomes successful, it will drive the whole industry into much greater success.

The MMA was absolutely right.

Most of the manufacturers got on board and, almost immediately, started educating the market through books on MIDI.

How MIDI Became a Standard

One of the key features of MIDI right at the time it started was how efficient it is.

It allows users a pretty significant amount of info to be transferred using just a tiny amount of data.

Considering the number of limitations in the 1980’s methods of digital data transmission, this proved to be quite essential to ensure that the reproduction of musical timing was accurate.

The availability of MIDI-compatible computer hardware further cemented its popularity.

The most notable was the release of the Atari ST in 1985, which came with built-in MIDI ports.

As potential extra features or weaknesses were eventually identified, the MMA updated its standard regularly after the first publication.

All of these added additional standards or features without making the previous ones obsolete.

It is questionable just how relevant a lot of these standards are to producers and musicians.

This is especially true if you consider a lot of them relate largely to standardizing the playback of music distributed in MIDI format.

Most likely, none of these will affect you unless you are planning to distribute your work as MIDI files.

If we have to talk about MIDI today, it is clear that you will find it everywhere.

Initially, MIDI was just a thought that separated the sound from the keyboard.

Now, it comes built-in, from even the most budget-friendly keyboards to professionally-priced ones.

It was only until recently when the spec continued to remain at the 1.0 version.

MIDI data can be considered responsible for almost all the music that is made today.

More importantly, it has helped in lowering the barrier to entry for music production.

Rather, all they need to use is MIDI devices and choose whatever sound they like.

It is pretty clear that MIDI has been extremely important ever since it was launched in the ‘80s for developing music technology.

However, there are some weaknesses, too.

There was an alternative that was heavily researched called the ZIPI or the Zeta Instrument Processor Interface protocol.

Proposed in the mid-1990s, it failed to get any support from the manufacturers, and eventually, it was shelved for good.

The same development team helped in developing the OSC or the OpenSound Control protocol.

This protocol was used by the Native Instruments’ Reaktor, Max/MSP, Supercollider, and Traktor.

The OSC is considered a significantly higher bandwidth system, and it can overcome a ton of MIDI’s timing issues.

The most notable of them is transmitting info with built-in timing messages extremely quickly through high-bandwidth connections.

Typically, MIDI devices assume all the timing is correct and respond to each message the second it is received.

Compared to this, OSC is better instead of relying on event messages in real-time.

An important barrier to developing a more universal protocol for modern music equipment is that there’s just a lot of variation between the equipment.

There are tons of different methods of synthesis, programing systems, user control levels, and sound manipulation forms available on multiple pieces of gear.

As such, it is almost unlikely that there can be any universal system to control them.

That said, computer interfacing and processing technologies have developed so much and so quickly since the early 1980s.

This could mean that the solution perhaps does not lie with replacing or updating the MIDI.

Instead, it could be with placing a greater onus on software developers and manufacturers.

They can develop their own powerful proprietary DAW-based control systems to operate through an existing USB or wirelessly.

MIDI: Bringing Everyone Together

Now that you know when was MIDI invented, it is clear that it emerged as a solution to a practical problem.

Gradually, it then evolved into a more expressive and flexible tool than what it was initially assumed to be.

It is the product of all competitors working towards making things much better, not just for one another but for all musicians worldwide.