When trying to define what is MIDI, everyone knows it is one of the most important tools for producers and musicians.

Those working with any type of digital music probably know and use this already.

Basically, MIDI is as confusing as it can be powerful.

It is of such importance in the process of mixing and recording music that many find it a challenge to figure out where to even start.

Nevertheless, you will quickly realize that the benefits it offers far outweigh the required learning curve you have to go through to master it.

Quick Navigation
What Is MIDI?
MIDI Ports
MIDI Cables
The Advantages of Working With MIDI
How to Use MIDI?
How Are MIDI Files Saved?
What Is a MIDI Sequencer?
MIDI Messages
Channel Messages
System Messages
Common MIDI Setups
MIDI Controller and DAW
Computer, Synthesizers, and MIDI Interface
Hardware Sequencer, Synthesizer, and Drum Machine
How to Master MIDI

MIDI is an acronym for Musical Instrument Digital Interface and is among the most valuable tools in the toolkit of a producer.

It does not matter if you are a seasoned producer working in the best facility or just a bedroom producer starting out.

This is any modern musician’s best friend.

If there’s a rap producer chopping up samples or a singer using a software instrument to add a guitar to their acoustic ballad or the band without a drummer making beats to perform over, they are all using MIDI.

You can say that MIDI is almost in every track you’re listening to these days, especially the ones that are digitally produced.

Let’s assume that MIDI is a language.

When you can fluently speak a language, you can use it to listen to others when they are talking to you, and you can also use it to speak.

Devices fluent in MIDI also function in a similar manner.

They can take or send out MIDI data, except they “hear” and “speak” through the outlets for cables called ports.

Some MIDI devices also have a third type of port known as MIDI THRU.

This port will let a device copy the MIDI data coming in and send out an identical string of data.

The MIDI THRU will allow a device to take in or send identical information, which is helpful if you are linking many devices.

For instance, if you wanted several drum machines or synthesizers to be synced to the same tempo, you use this port.

There are huge differences between audio and MIDI data. Hence, you cannot use regular audio cables to take in or send MIDI data.

Instead, you have specific MIDI cables that come with five miniature pins.

MIDI can be communicated via USB, and it can happen in a couple of ways.

The first one is that you are sending the MIDI data to an interface designed to handle this exact task.

The MIDI interface can be thought of as translators, converting all MIDI data into instructions read by a computer.

The interface will then send the data to the DAW (Digital Audio Workstation) with the help of the USB.

You can cut down this whole process by opting for a specific MIDI-to-USB cable.

This will let you bypass the MIDI interface and send data directly from the device to your computer.

The wire for this process will have a MIDI plug on one side and a USB plug on the other.

There are MIDI devices that come with their own USB ports.

This is a welcome design choices; it makes things even easier because you will be able to use a regular USB-to-USB cable.

To know which one of these approaches is the best for you, check the specifications or manual of your MIDI controller.

The Advantages of Working With MIDI

One of the major advantages of working with MIDI is that it is flexible.

Once you have made or sent MIDI data, it can be edited or transferred with just a couple of mouse clicks.

Furthermore, working with MIDI is the best way to do that if you want to make music quickly.

It will allow you to create music without you having to record anything.

This is particularly great if you want to lay down tracks if the recording location is in a noisy area or if you are traveling and do not have access to a microphone.

Most importantly, the file containing all your MIDI data are quite compact.

Digital audio files, even the extremely small ones, can contain thousands of small samples of sound.

MIDI files are just strings of data, which means they tend to be much smaller than a full audio file.

Since these files are so small, it is quite easy for the computer to process them all at once and is less likely to crash when it plays 30 MIDI files instead of 30 audio files.

How to Use MIDI?

MIDI is capable of playing multiple roles in your creations. In fact, you may already be familiar with a couple of them.

To start, we believe it is important to talk about what MIDI is not.

Keep in mind that MIDI will never transmit an audio signal; it only transmits its information.

This means that if the MIDI keyboard does not come with a sound onboard, such as a sampler or synth, it will not make any sounds.

This helps shed light on where MIDI comes into your workflow.

When you have to compose music using the plugins present in your DAW, the MIDI clips will be the regions on the timeline that controls which notes the plugins will play and also when it plays them.

When connecting the MIDI controller to the DAW to play any virtual instrument, you are simply feeding it with MIDI info in real-time.

This is also the same when you are sequencing MIDI in the DAW and sending the info to the hardware gear, such as a drum machine or analog synth.

Perhaps the best things about MIDI is that it can edit performances easily note by note, make changes in the articulation, and also replace or alter the sound that is playing them.

Additionally, you are capable of controlling more than the notes by using MIDI.

A lot of the features of a traditional music performance will have an equivalent in MIDI.

You can use it to change the patches or automate the parameters on software or hardware instruments or effects. 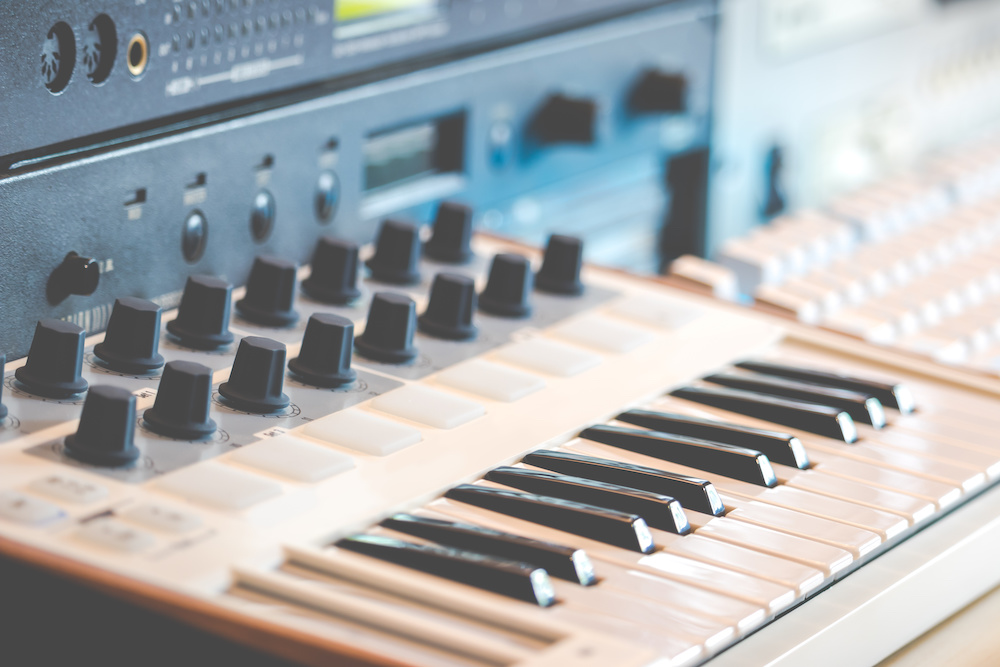 How Are MIDI Files Saved?

A MIDI file is basically a file that contains a lot of MIDI info.

Typically, it will be called [file name].MID, and this is an industry-standard thing.

Once you have made your MIDI file, you will be able to import it into most MIDI software.

Whatever you wish to create with your MIDI file, an audio sample or a score, it can be done with ease since MIDI files are extremely small and can be passed around quickly.

Keep in mind, though, that these files contain only MIDI information.

Your DAW will come with its own file format to store all the remaining information in your sequences, and the MIDI will just be a small part of this.

What Is a MIDI Sequencer?

A few decades ago, the MIDI program was just that, MIDI only.

A MIDI sequencer is an essential software that allows you to record, playback, and edit most types of messages, especially the channel voice messages around note events.

A MIDI event is basically a MIDI message that will occur at a specific time.

They are particularly relevant when it comes to compositions relying on MIDI sequencers.

Along with the traditional graphical MIDI sequencers, notation software is something that’s also enabled by MIDI.

All the MIDI note-off and note-on messages can be displayed as a traditional score.

These days, you can typically expect software capable of combining MIDI sequences with the audio, and this is the full-featured DAW.

Most of them have a notation view, too.

Through the DAW, you’ll also have access to several virtual instruments.

All of these are software samples and instruments and can be played via the MIDI information.

This makes your simple laptop play absolutely any sound and even any instrument you would like.

MIDI messages can be referred to as digital data transmissions that tell the music gear what to do.

They carry the info about which of the parameters need to be changed, which of the notes to play (or how it should be played), and how the system should behave.

The messages can further be divided into two kinds: Channel messages and System messages.

A majority of the time, you will deal with channel messages.

However, there are certain important functions, such as transport and clock, that are system messages.

Channel messages can transmit up to two types of data at one time.

For instance, note-off and -on messages carry the note number value along with the value of velocity (the intensity that the note has played with).

This is part of how the MIDI is capable of capturing a performance’s expressiveness.

These are the main MIDI Channel Messages:

System messages control all the other important data that the digital instruments require to communicate with one another.

These are the most important MIDI system messages:

There are older MIDI gears that rely heavily on this.

We get that all of these may be a bit complicated, but thankfully for most MIDI tasks, your DAW will handle all the technical details of these messages without you even knowing.

There are countless ways to use MIDI, but among all of them, these are three of the most common setups:

The most common and possibly the simplest MIDI setup is using it with a MIDI controller with your DAW in your home studio.

This is a portable, powerful, and simple way to use MIDI.

By using VST plugins, this simple setup will turn your MIDI controller into whatever you want it to be.

It can be millions of different synths, guitars, flutes, horns, drum machines, or anything you want.

You can make edits to sequences in the piano roll and also manually add input notes with the controller to play your parts.

Additionally, many MIDI controllers come with pads, sliders, and knobs that are also assignable through the DAW.

This entire setup is intuitive and light for composing all genres of music via the MIDI.

The MIDI tracks in the DAW sequencer controls actual hardware synthesizers, thanks to the MIDI interface handling conversion duties.

This means you will be able to use all the digital techniques and tools to input and edit notes and then play them back with a real synthesizer or any device with MIDI capability.

In such cases, the DAW will act as the main hub for sequencing and sending all the MIDI information.

Using the DAW piano roll, you can instruct each hardware unit to play any sequence of notes on any MIDI channel.

Not every MIDI setup needs to be computer-centric.

In this common setup, the DAW’s MIDI editing features can be replaced with a hardware sequencer.

With the help of MIDI THRU, the sequencer will send info to three devices: a drum machine and two synths.

This setup is like a mini DAW rig but made up completely of hardware gear.

It was commonly used by most producers before computers became common and cheap.

How to Master MIDI

MIDI is an important tool for any modern music producer, especially considering how flexible and easy it is to use.

Not only will you be able to “play” any instrument, but you can add whichever effects you want.

By mastering MIDI, you open yourself up to endless possibilities.

We hope this article has answered the question of what is MIDI and inspires you to make your own music.