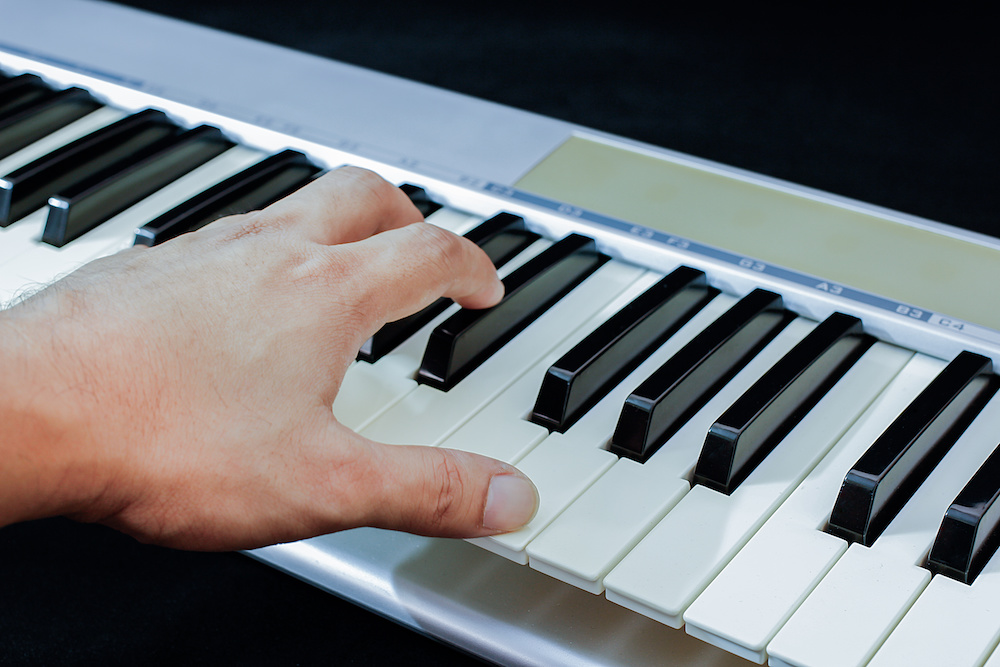 Although music has its way to come from nature and non-electronic devices, it always seems to go into the future with sophistication.

More and more, audio devices keep becoming extremely high-tech and start losing some of the features to which we’re so accustomed.

However, musicians tend to enjoy some musical instruments in their traditional form.

The acoustic grand piano is one of them.

The following excellent picks can motivate anyone who likes the feel of a real acoustic grand piano on a MIDI controller. 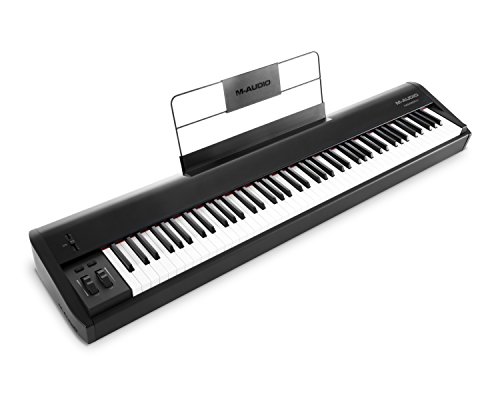 The Hammer 88 is one of the two MIDI keyboards of M-Audio having weighted keys.

Any pro, semi-pro, or learner can enjoy having the genuine feel of a grand piano while using this device.

It can pair with PC Windows 7 or Mac OSX 10.8 or any of the later versions for both platforms.

The device comes with a music rest for your music sheets, but it does not include a stand.

These weighted keys cleverly capture even the subtlest of tinges in a user’s playstyle.

They also emulate the response of a traditional acoustic grand piano while delivering the capabilities of MIDI functionality.

With these characteristics, anyone using the Hammer 88 can be exceptionally expressive.

In addition to the 88 fully-weighted keys, the Hammer 88 has a master volume slider, plus and minus buttons, and pitch bend and modulation wheels.

With these controls thoughtfully positioned on one end of the keyboard, they intuitively add expression to any performance.

Since the pitch wheel is unity-locking and separate from the modulation wheel, you can add glissando and portamento effects.

You can also assign the modulation wheel to any preset parameter within your choice of software.

Even the master volume slider is mappable to a compatible DAW or MIDI parameter.

You can also map the plus or minus buttons for selecting different effects, programs, MMC messages, octave jumps, and more.

With the Hammer 88, you don’t have to limit your practice to computer-based software.

The Hammer 88 has a 5-pin MIDI Output port, allowing connections with compatible peripheral devices, such as drum machines, sound modules, and synthesizers.

It links to your computer using a USB-MIDI connector, and it uses the same for its power source.

The Hammer 88 is class-compliant, meaning you can freely choose your virtual instruments without installing OS drivers.

It also comes with a three-month subscription for Skoove.

The KeyLab 88 MkII integrates the comprehensive controls of Arturia’s first KeyLab with the smart features and streamlined workflow of the KeyLab Essential.

Arturia dubbed the Keylab 88 MkII the “Controller Supreme,” the ultimate companion for both stage and studio.

Compared to the Hammer 88, the KeyLab 88 MkII is shorter, thinner, and lighter.

Compatible operating systems include Windows 8.1 and MacOSX 10.13 or later versions.

If you get one for yourself, you will also receive a sheet music rest and a laptop plate.

The KeyLab 88 MkII boasts one of the finest piano-weighted, hammer-action, aftertouch-enabled keybeds ever manufactured.

With this well-known keybed design, any user can expect the iconic balance and beautifully tactile response from an acoustic piano.

As the product name suggests, the KeyLab 88 MkII also has 88 keys.

The first 16 keys double as MIDI channel selectors with a shift button.

The KeyLab 88 MkII hosts a plethora of controls complementing the Fatar keybed.

You will find that the KeyLab 88 MkII is the ultimate music laboratory among the options available on this list.

While the surfeit of functions may seem overwhelming, the KeyLab 88 MkII offers three distinct modes for instantly switchable workflows.

The three modes are Analog Lab Mode, DAW Mode, and User Mode, each having its main switch button below a central jog wheel.

Some buttons and a dual-line LCD surround the jog wheel, offering varying functions for each of the three modes.

To the right of the central panel, you will find several rotary knobs and faders for panning and leveling eight channels at a time.

Opposite the faders and knobs, the KeyLab 88 MkII has more performance controls and a DAW command center.

The DAW command center has five buttons each for tracking and global control, and it has six transport buttons.

There are also several sections on the rear panel of the KeyLab 88 MkII.

The USB connector is also class-compliant.

With a purchase of the KeyLab 88 MkII, you will also gain access to the Analog Lab software with 7000 keyboard sounds and synths.

In addition to Analog Lab, you will also get Piano V, Ableton Live Lite, Vox Continental V, and Wurli V.

If you don’t want to use these inclusions, the KeyLab 88 MkII is also compatible with Logic Pro X, Pro Tools, FL Studio, Bitwig, and several other programs. 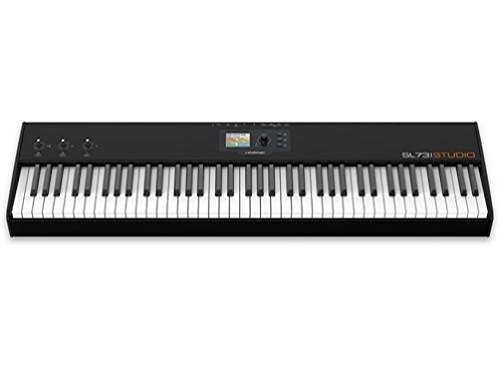 The SL Series is StudioLogic’s advanced keyboard controller product line, and the SL-73 Studio is the smallest.

The SL-73 Studio has a very compact profile, making it an extremely portable professional-grade controller.

It is even smaller than the Hammer 88 and the KeyLab 88 MkII.

For operating system compatibility, the SL-73 Studio pairs with Windows 7, MacOS 10.9, or any higher versions.

If you get the SL-73 Studio, you will also receive a StudioLogic PS100 switch pedal and a power adapter.

For its keybed, the SL-73 Studio also sports the same fully-weighted keys as the Arturia KeyLab 88 MkII.

However, the StudioLogic SL-73 Studio only has 73 keys. That is one less octave compared to all the other alternatives.

The center panel of the SL-73 Studio presents a TFT color display, a six-way knob, and three buttons.

The display and the knob allow you to navigate the SL functions quickly, and the three buttons let you move back and forth through menus.

One of the selling points of the SL-73 Studio is its three joystick-type controllers.

Stick 2 only has a spring in the X direction, and the third stick does not have any springs in both directions.

You can program several functions for stick 2, and you can use stick 3 for cross-fading, panning, and parameter control.

The SL-73 Studio has four connectors for pedals, three MIDI ports, a USB port, and a power jack.

While some computer programs would probably work well with the SL-73’s MIDI functionalities, StudioLogic only presents the SL Editor as its major software partner.

The SL Editor offers a clear and comfortable user interface, but you might want to invest in better compatible applications.

The MK2 Kontrol S-Series from Native Instruments compiles an intuitive integration hub that unites all instruments, effects, samples, and loops using a powerful and free plug-in.

The S88 is a smart keyboard controller with weighted keys offering a true piano feel.

Since the S88 MK2 is the newest flagship model of the S-Series, it will require the latest service pack of Windows 10 or the latest updates of MacOS 10.12 and 10.13.

This product only includes a USB cable and a power supply adapter.

Like the Arturia KeyLab 88 MkII, the Komplete Kontrol S88 MK2 has a Fatar keybed with 88 keys.

However, Native Instruments and the Komplete Kontrol S88 MK2 do not have any official information about the Fatar action model it uses.

We’re just assuming that it has the same TP-100LR because the TP-40 should make it heavier than its actual weight.

Aside from the 88 keys, you will find ergonomic pitch and modulation control wheels.

Transpose and Fixed Velocity buttons line the upper area near the wheels.

A touch strip below the wheels enables expression control for the keys.

Below the dual display, you will find eight programmable knobs.

Additionally, the keyboard has a four-directional push encoder for one-handed sound browsing.

This knob sits in a section with the mode buttons.

For connectivity, the rear panel of the S88 MK2 has connections for MIDI in and out, two pedals, a PSU, and a USB connector.

You will also find a Kensington lock as an added feature.

Komplete Kontrol is an easy-to-use software that cleans up musician workflows.

It smartly maps all keyboard controls to all connected hardware so that you can tweak all your sounds in one place. 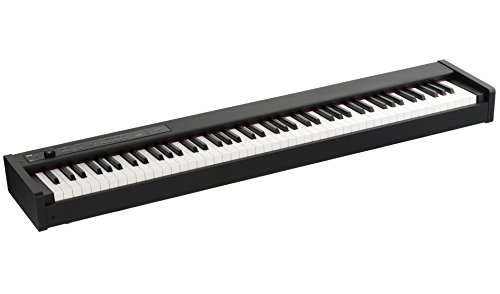 The Korg D1 is a slim piano that offers the playing feel of an acoustic piano.

It looks great on stage and in your bedroom, making it an exceptional device for live performances and home sessions.

Weighing 35.27 pounds with the piano stand, it is slightly heavier than the Arturia KeyLab 88 MkII.

The product includes an AC adapter, a music rest, and a damper pedal.

The Korg D1 has an 88-key, Japanese-built RH3 keybed that offers a distinctive keyboard action.

You would find the same keybed on the more expensive, higher-tier Korg Kronos, SV-1, or Grandstage.

The RH3 emulates real acoustic piano keys, integrates a heavier feel in the low tones, and gives a lighter feel in the high tones.

For controls, the Korg D1 has three banks for ten programmable sounds.

It has controls for tempo, time signature, accent, transpose, sound, and volume.

You will also find buttons for three levels of brilliance, reverb, and chorus.

Connectivity features include a headphone jack, In and Out MIDI sockets, a DC power connector, a damper jack, and a Line Out (L/MONO, R) jack.

Unfortunately, the Korg D1 does not offer USB connectivity for computers.

You will need a USB MIDI interface to combine the Korg D1 with VST instruments.

If we were to base our choice of the best weighted MIDI keyboard on key touch and feel quality, we would go for the products with the TP-100LR or RH3 keybeds.

That said, if we considered all the features to look for in a professional-grade MIDI keyboard controller, then the Arturia KeyLab 88 MkII is the best option.

Keep in mind that keyboards with fully-weighted keys tend to be heavier and more expensive.

Go for the portable MIDI controllers if you are confident that you can create exceptional outputs using mini-keys.